Today on the news and on the internets was the story of Eclipse, the “urbanized” lab who lives in Seattle and gets on the bus all by herself and gets off at the stop for the dog park!

It definitely seemed like something Kylie would have done. In her first home with us in the high-rise in Honolulu, Kylie would lay on the floor for hours looking out the windows that went all the way to the floor, watching the bus stop across the street. We always thought it was probably like watching tv for her, and she would keep track of who got on and off every day and at what time. Now however it seems plausible that she was plotting.. “I’ll bet that bus would take me to the park (or beach or where ever Kylie wanted to go on a particular day), if I could just get down to that bus stop!”

Then when reading some of the comments on the article about Eclipse, many of which were criticizing her parent for being so irresponsible, which we can definitely relate to (obviously since there is an entire category on this blog dedicated to our “bad parenting”), this one was especially relatable:

My dog would do this if she could. She’s a Shiba and thus incredibly independent. Every time I leave her in the car to run into a store, I come back to find her in the driver’s seat. One day she’ll just speed off as soon as she sees me coming out of the supermarket, because she can be a jerk like that.

We not only would often find Kylie in the driver’s seat when she was left alone in the car, we sometimes had to return to 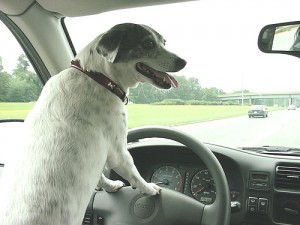