Can’t believe we’ve never posted about “The Fox” before, Kylie’s arch enemy for many years.. When we lived in a townhome in the suburbs of Denver in a neighborhood called Fox Pointe, there was a sign as you entered with a very menacing (at least to Kylie) picture of a fox.

And absolutely every time we drove past it, coming or going, day or night, Kylie had to put him in his place! And just so you know, Kylie was no fool; we had let her out of the car to walk up to the sign on more than one occasion, she was quite aware that it was not a real fox (although we did occasionally see a real fox in that neighborhood). This was just another one of Kylie’s creative little games she made up to entertain herself, and we belive also to entertain us. And typically the whole family would get in on it… As we would approach the sign and Kylie would stand up in her booster seat in preparation we were more than happy to get her all riled up!

“Get that damn fox Kylie!” She would bark like crazy, viciously! Sometimes we even joined in with the barking. 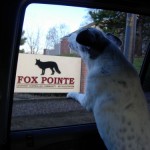 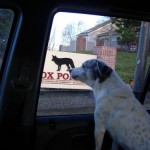 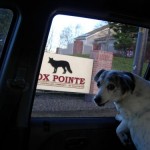 Oh and when the holidays were approaching and somebody from the HOA would put a santa hat on the fox, look out because that pissed her off even more! Not sure why, you’d think she would appreciate the fact that he looked ridiculous and certainly less threatening. But apparently foxes, real or otherwise, should not wear santa hats!!

{sigh} It’s just another, GREAT, example of how Kylie made everything more FUN!